By some miracle Offa’s Dyke was completed

Ele completed Offa’s Dyke on 11June.  It is an iconic race which began back in the 70’s.  It starts at the picturesque Hay on Way and finishes in Kington.  It is hilly trail and the cut off times added to the pressure. 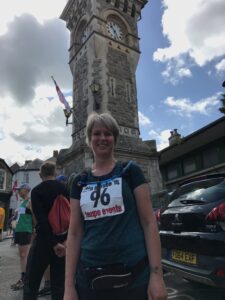 Very sore feet and tired legs by the finish followed by a long drive but it was all worth it to take part is such a great event.

Ele says, “Despite being caught by a couple of the sweepers I am very proud that I completed this without dying. Some of the hills were relentless and equivalent to climbing Snowdon…. at speed.”